This year 77.4% of our students have achieved a grade 9-4 in English language, literature and maths. This is equivalent to grades A*-C. This is an 8% increase on last years’ results.

It was the first year to see awarding of grades 9-1 in the reformed English language, English literature and maths GCSE’s. These new qualifications are more robust and have no internal controlled assessment that takes place during the two year course. Results therefore are wholly dependent on the terminal examinations in these subjects.

The % A*-C rate in almost all other unreformed subjects is higher this year than last year, in some cases quite significantly, for example Core Science is up by 10% and French is up by 20% to just under 80% A*-C.

Eight students have achieved A*s or A’s in all subjects including English and maths where grades 7-9 are equivalent to the old A/A*. 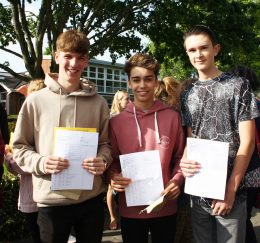